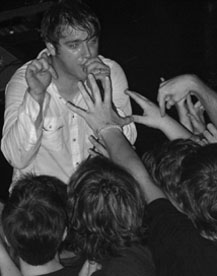 When you see a Letter Kills performance, your life will be changed. It’s something of an epiphany to see such a uniquely gifted band perform with the authority and musicianship of seasoned pros, while maintaining a band-next-door humbleness. Needless to say, they’ll make sure you never look at rock the same way again. Yeah, it’s a figure of speech, but taking it a bit more literally, they’re not above handing out a few black eyes either.

Opening band hot like (A) robot was a surprise hit with the sold-out crowd, wooing an oddly scenester-less audience with their brand of grunge-metal-rock. Vocalist Jordan Clark’s raw, angst-ridden vocals struck a chord with the girls at the show, as many got into a head-nodding groove. The boys, on the other hand, seemed to take more of a liking to Clark and lead guitarist Nick Leithoff’s axe-shredding, starting circle pits and reveling in the overflowing displays of testosterone.

Even without scenesters present, it’s no less impressive to get a L.A. crowd moving, and robot did just that. Not too shabby for an unknown San Diego band.

Though there weren’t any bandwagon-hopping trend followers in the audience, the same can’t be said for all the bands on the bill of this tour. The too-big-for their-screamo-clothes Stutterfly took stage next, with a high-octane performance, but an empty gas tank of originality ("A" for effort though, guys).

And then there was Letter Kills. You think you know what a LK show is since you saw them on Warped Tour or Nintendo Fusion? Well, prepare to be schooled in the art of rocking because a Letter Kills headlining performance will blow away everything you think you know.

Performing nearly all the songs off their major-label debut, The Bridge, as well as a Tom Petty cover, the band got to show sides of themselves they don’t have the opportunity to express as an opening band. Fans ate up the headliners as they blasted through their anthemic oeuvre, with the whole venue doing their best to match the voracity with which lead singer Matt Shelton attacked his mic.

From the chaotically frenzied "Lights Out" to the get-your-fists-in-the-air "Carry You" and "Shot to the Chest," the band’s set was explosive from start to finish. Even the slower, more melodic songs like "When You’re Away" were emotionally charged enough to keep the adrenaline flowing nonstop.

Colliding with anyone and anything in his way, climbing the light fixtures like a big punk rock monkey, diving into the pit to sing surrounded by their fans, Shelton was unafraid to get down and dirty with the best of them. The other showman of the group, bassist Kyle Duckworth brought an ’80s metal bravado to the performance, which along with Shelton’s southern boy charm, make Letter Kills one of the most visually engaging and likable bands onstage.

Shelton said it best when he returned to the stage with guitarist Dustin Lovelis for "Hold My Heart pt. 2," stating, "Everything we do, it’s not for Letter Kills. This encore? It’s not for us, it’s for you guys."

If ever there was a mantra that embodied this band, Shelton hit it right there – bands with as much respect for their fans as this Temecula five-piece are few and far between. It shows through in the genuineness of their music and as anyone at the Troubadour this night can attest to, the dedication with which their fans reciprocate that respect.