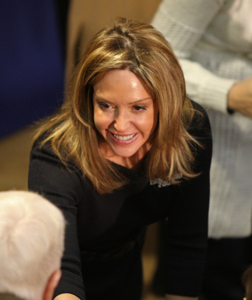 That’s when it struck me: he’s Fred Thompson … you know, that guy from “Law & Order” and that one Sean Connery movie about the nuclear submarine. Oh, and for the record, he was a senator from Tennessee and just ran for president.

Though I knew I’d lose out on prime seats for the next showing of Baby Mama, I did an about-face at the children’s play area near the food court and followed Sen. and Mrs. Thompson, née Jeri Kehn, down the escalator. From my stalkerish position only a few steps behind, I could keenly observe the faces of all those traveling up the ascending escalator.

Of the roughly 50 people who passed by, exactly four turned their heads to follow the senator. An older couple muttered “Ben Thompson … senator … Kentucky…” A woman with green glasses jabbed the distracted man next to her and pointed, “Check out ‘Law & Order’!”

A teenage boy in a Washington Redskins jersey watched them during his entire trip up the escalator. As he passed me, he turned to his friends and proudly exclaimed, “She is smokin’ hot, and I would definitely give her the bone.”

As I stepped off the escalator and continued to follow the Thompsons through the mall, I tried to remember when Fred officially left the presidential race. It was after his crippling third-place finish in the South Carolina primary, and that must have been late January. In less than four months, the man had parked his “Security, Unity, Prosperity” tour bus and was now passing the windows of Eddie Bauer.

I was the closest thing they had to a security detail. He had no handlers. There was no media and only flashes of public recognition. I suppose I had no reason to expect anything else; he was no longer a senator and had given up his gig on “L&O” to make his run at the White House. But I was upset, both that no one had really recognized him and that I nearly missed him myself.

Sad is the state of our democracy when most don’t vote for our leaders and some don’t even know who they are. Thompson is now more famous for pretending to enforce the law on TV than actually writing it in Congress, more recognized for the hotness of his wife than his bid to be the leader of the free world.

So as the senator approached the mall exit, I quickened my pace. Though I would never vote for the man, I wanted to say something, anything, acknowledge his service, to demonstrate my civic responsibility and appreciation of democracy, spelled and acknowledged with a lower-case and entirely universalist “d.”

But I stopped. It was here, between the Barnes & Noble and Brio Tuscan Grille, that our founding fathers would most recognize their democracy, as a system once populated with citizen-politicians who were people first and statesmen second. Did Lincoln and Washington strive merely to create the National Mall, full of its grandiose tombs and streets choked with 16-SUV fleets of Secret Service officers and PR gurus? Hardly.

The heart of democracy, for good and bad, is forever enshrined in the flawed, honest humanity of its masses who window-shop and eat at the food court. I turned back, left the senator to his evening, and piled back into the theater to watch a pregnant woman pee in a sink.