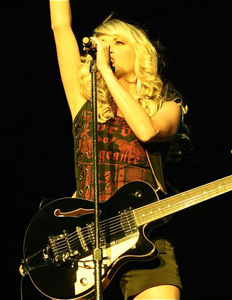 Another music festival in the desert the weekend after Coachella? How can they pack those grounds again? Country Music.

Over 180 thousand people showed up for this amazing event. The line-up had over 50 bands including Tim McGraw, Carrie Underwood, Rascal Flatts, Taylor Swift, Big and Rich and even Mike Ness.

The highlights of the show were performances by the Eagles, Trace Adkins and Gretchen Wilson. When night three hit, everyone was waiting for Carrie Underwood and Tim McGraw, who stole the show as the event came to a close.

Out of all the shows I’ve been to this year, this one takes the cake. It felt like you were in your best friend’s backyard.