What Wears You?: The Message on the Hat 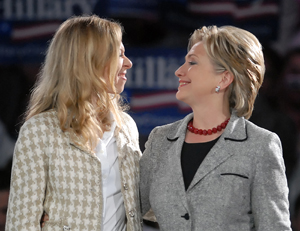 GRAFTON, WEST VIRGINIA — I’m standing in the rain next to the International Mother’s Day Shrine in downtown Grafton. My clothes are soaked, my right shoe is swimming in mud after stepping off a curb into a bathtub-sized puddle, I’ve already called my mom from the birthplace of Mother’s Day, and Hillary Clinton is just wrapping up her speech in the B&O Train Depot across the street.

Senator and Chelsea Clinton are in town today, celebrating Mother’s Day on its 100th anniversary and stumping for votes ahead of the West Virginia primary. Her overwhelming popularity in the Democratic electorate of the state is evidenced up and down Main Street, with locals waving signs and leading chants even as the weather worsens.

Standing on the rain-slicked hill overlooking the depot, my chattering teeth are interrupted by a youngish man thrusting a white baseball cap into my hands. “Here buddy,” he says, “take this, it’s yours.”

I slam the cap down over my sopping head just as Clinton, clad in a mustard-yellow pantsuit and overcoat, emerges from the depot to work the rope line, chatting with her aides and taking pictures with the assembled faithful. She shakes my hand but then moves quickly onwards, signing an autograph on a white baseball hat that looks suspiciously like mine.

I turn around and look back up the hill to see at least a third of the crowd wearing white lids, all emblazoned with blue writing. As Clinton’s Secret Service detail brushes past me, I take off my hat to realize that I just shook a presidential candidate’s hand wearing a CLEAN COAL complimentary cap.

I get back home and visit the Web site that appears on the back of the cap, americaspower.org. It takes less than 10 minutes and a recent Washington Post article to determine that the Clean Coal caps that kept Grafton heads from freezing are courtesy of the American Coalition for Clean Coal Electricity, a group combining the Center for Energy and Economic Development and Americans for Balanced Energy Choices who, the Post reports, are waging a $35 million campaign to promote the use of coal in primary and caucus states in response to wide-reaching campaign promises to curb global warming. The coal industry generates about half of the electricity in the country as well as 40 percent of domestic greenhouse gas emissions.

Now, I can only begin to appreciate the importance of the coal industry in West Virginia, knowing that nearly half of the coal workers in the eastern United States live in the Mountain State and neighboring Kentucky. I accept that the professional lobbying of politicians is, for the most part, a legal and effective way of shaping public policy. I deeply value this long primary season because it has allowed citizens whose voices are often never heard to gain unusual access to the candidates and engage with the issues that most define their lives.

But whether a free baseball hat is being placed directly in your hands or you’re watching campaign ads on TV or attending rallies or scouring the Internet for facts about the candidates, it is the essential responsibility of all voters to understand the powerful extra-political forces at work in the government, particularly during an election season. Am I a supporter of the coal industry because I wore their hat? Do I represent an average “concerned citizen” when I shake a candidate’s hand wearing a message that I not only know nothing about but may fundamentally disagree with?

Lobbies in Washington by their very nature are single-issue entities; we must preserve our votes to serve more than a single issue at the expense of all others. We must weigh the scope of future challenges and assess the overall depth of the candidate that will tackle those challenges before casting away our chance to determine our collective best destiny.

US News
Prolonged social distancing would curb virus, but at a high cost
228 views

US News
What we know about Mark Riddell, a test-taking whiz linked to college cheating scam
575 views

US News
California gunman was ex-Marine who might have suffered from PTSD, sheriff says
973 views

US News
Rates of 3 STDS in US reach record highs CD says
1,071 views

US News
Trump’s tax cut not for everyone: 1 million Californians will owe $12 billion more next year
2,537 views