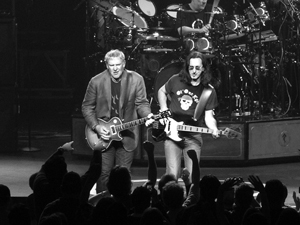 When the classic Canadian progressive rock band Rush put on a show, they go big.

Besides an incomparable three-hour set, indoor pyrotechnics and laser light show, Rush band members even ventured outside of simply playing their own instruments.

Singer and bassist Geddy Lee played the keyboard on songs like “Subdivisions,” while guitarist Alex Lifeson added an additional 12-string guitar to his apparently insufficient six-string.

Drummer Neil Peart, however, had the most impressive display of musicianship all night with his nearly 10 minute long solo and 360 degree drum kit that rotated on command.

Rush’s quirky sense of humor came through their bizarre video clips during and before songs. Some clips included the band themselves, while others showed chimpanzees dressed as sailors and riding horses, as during “The Main Monkey Business.” “Tom Sawyer” was even introduced by the cast of “South Park” humorously attempting to perform the song themselves.

One knew what to expect when hearing frontman Lee say, “Let’s go back in time now ... back when mullets ruled the world.”

Soaring rock anthems of the 1970s and ’80s like “Limelight,” “Free Will” and “The Spirit of Radio” were obvious highlights for the predominately male audience that night.