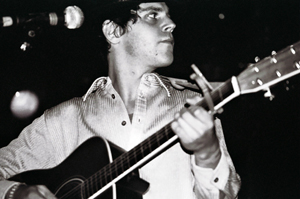 Most apparent when he pranced about on his tippy toes, as Malachi DeLorenzo threw down beats of pure punk rock during “Honey Pie,” was that Langhorne Slim is one of the most perfect performers around. His comedic timing is spot on, and he can switch up from a folk piece of love like “Sweet Olive Tree” to a rowdy rendition of “In the Midnight” at the drop of a hat (literally – the man’s all over the place, and his hat falls quite often).

His voice carries well without a mic, as was made obvious during an intimate acoustic round of “Rebel Side of Heaven,” the second of three endings to a set that could have and should have gone on forever.

But most underrated about Langhorne are his backing musicians, upright bassist Paul Defiglia and drummer DeLorenzo, who’s the son of Violent Femmes drummer Victor DeLorenzo and – like Dad – is brimming with restrained punk energy from his excited eyes to the brushes in his hands. Defiglia’s quieter, sure, but owns some masterfully quick fingers and serves as a fine complement to his restless counterparts, rounding Langhorne Slim and the War Eagles into a trio of flawless energy and style.