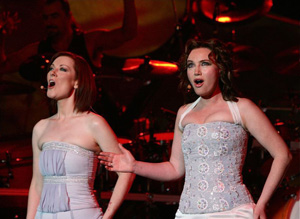 The night crept in, and the stars began to fight for the sky against the moon’s almost full glow. The curtain opened, and the lights onstage peeled open to a subtle blue and purple mix.

As the fog rolled in, an angel with a violin lightly graced the stage with her subtle footwork followed by the sincere sound of her fiddle. The music picked up as she explored the stage until she suddenly froze.

Four beautiful figures emerged from the fog at the back of the stage to reveal Celtic Woman. As they took the stage they began to sing and for one short moment, I was in Ireland, at peace with the world.

If and when they come to a town near you, make sure you get tickets because these ladies put on a show that will have you mesmerized.