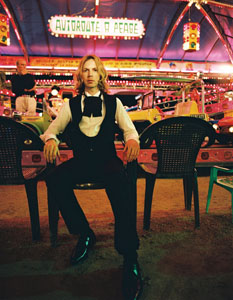 If you’re planning on doing the whole summer road trip thing, let us forewarn you that if you catch more than one big festival show along the way, your trip is likely going to inadvertently turn into you following either Radiohead’s or Jack Johnson’s touring schedules. Not to say either act are unworthy of you deadheading your summer away for them, we’re just saying that they are to summer festivals what Paris Hilton is to red carpets and what Timbaland is to shameless music video cameos.

Like them or not: They. Are. Everywhere. Even if Thom and Jack aren’t your flavor though, the big abyss of nameless space that constitutes everything else in the country that isn’t a part of Los Angeles has quite a bit to offer, too.

May 31 @ Stramler Park in Bakersfield

While certainly I’d never recommend willingly going to Bakersfield for leisure, least of all during summer, there are a few events that may warrant a drive up north for a day.

Though there are a whole lot of whossats and whatssits to sort through to find the worthwhile bands on this bill, headliner Scary Kids Scaring Kids never fails to make a day worthwhile. Even one spent in Bako. Joined by Halifax, the Higher, Classic Crime and Eyes Set to Kill, think of it as a Warped Tour warm-up before the real chaos hits town.

Metallica, Pearl Jam, B.B. King, Allman Brothers Band, Chris Rock and no curfew. That means the bands and comedians are going 24/7 for four days straight in the middle of Tennessee.

Easily the most varied and eclectic festival out here, this 11-day fest brings together hard rock, emo, country, funk, soul and pop’s finest. I never thought there would be a day when I could see Paramore, Alicia Keys, Alkaline Trio and 311 play the same festival, but lo and behold, hell hath frozen over.

Sweetening the deal even more are Blondie, the Bravery, Coheed and Cambria, Dashboard Confessional, the Dollyrots, Finger Eleven, Jack’s Mannequin, John Mayer, Paolo Nutini, O.A.R., the Roots, Seether, Taylor Swift (yes, I like her, what of it?), 12 Stones, Vedera and at least half of the artists you likely have in your CD case right now.

If you’ve scoffed haughtily at all the festivals listed so far and asked aloud why nobody has good taste in music anymore, this one’s for you. Only those of the highest caliber of elitism and snobbery are welcome, and don’t bother trying to fake it just because you know who Vampire Weekend is. Animal Collective, Jarvis Cocker and Dinosaur Jr. fans can pick up the scent of Paramore on you from a mile away.

It’s not often that the musicians you really love play shows with musicians that everyone thinks are cool, and vice versa. Somehow, the two categories always seem to be mutually exclusive to each other when it comes to the summer festival circuit, with each group filling in the vacancies with awful bands nobody cares about.

This year’s Lollapalooza line-up, however, leaves very little to be desired with its roster. Radiohead, Rage Against the Machine, Kanye West and Nine Inch Nails headline the three-day festival, making it clear that Lolla is not messing around this year with whom they invite to grace their stage.

Along with the likes of the Black Keys, Brand New, Cat Power, Lupe Fiasco, Louis XIV, MGMT, The Raconteours, Mark Ronson, Steel Train, Butch Walker and Wilco, the annual tour-turned-festival is pulling out its big guns and may just be looking to give Coachella a run for its money.

Admittedly, I don’t really get this one. If we’ve learned anything from Lollapalooza, it’s that downsizing to a one-day festival doesn’t really lend itself to statements saying the tour is going stronger than ever. But hey, what do I know?

In true metal fashion, Ozzy and Sharon bring out one of metal’s biggest icons and a slew of up ’n’ coming shredders soon to be on every metalhead’s radar. With Metallica taking the helm of this year’s, er ... singular show, along with fellow Ozzfest mainstays Serj Tankian and Shadowsfall, the tour may not be operating on as large of a scale as years past, but the amount of rock it’s still bringing is anything but modest.

Bob Dylan’s a music legend, Foo Fighters are always awesome and Stone Temple Pilots rocking the ’90s back into style is something nobody can argue against, but also worth noting is that M. Ward won’t be flying solo at this festival.

Unless the folks who designed the festival’s Web site are just really, really mean, expect to see one Zooey Deschanel playing Ward’s better half onstage and expect to subsequently swoon like you’ve never swooned before. Then go catch Black Rebel Motorcycle Club, the Offspring and Taking Back Sunday to try and take the edge off.

Radiohead, Surfy McJamband, that scruffy indie band with all the power chords, that other indie band that’s significantly older, the “Him” part of She & Him – it’s all the usuals at this one, but now with fresh Beck and Cold War Kids flavors. It’s mainstream-tested and hipster-approved.

Tom Petty, Ben Harper and Devendra Banhart should be hanging around here, too, and since by the end of summer you should already be BFFs with Thom, you’ll have plenty of opportunities to schmooze them.

Had to plug Ludacris.