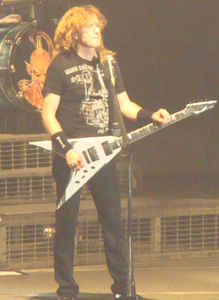 This year’s edition of Gigantour didn’t feature as many heavyweight metal bands as it has in the past. Only In Flames and Children of Bodom provided the star-studded support that Megadeth deserves.

Due to the smaller line-up, lesser-known bands like Job for a Cowboy and High on Fire were able to put on a longer show.

Children of Bodom showcased new tunes from their recently released Blooddrunk album, and In Flames followed suit with new songs from A Sense of Purpose, while also playing fan favorites, including “Cloud Connected.”

It all set the stage for Megadeth, who ripped through their staple anthems: “Symphony of Destruction,” “Hangar 18” and “Peace Sells.” For anyone who has ever thought less of Megadeth after the 2004 reunion, shows like this reaffirm that regardless of the line-up, as long as Mustaine is at the reigns, nothing can go wrong.