Mindless Self Indulgence: May 24 @ the Wiltern 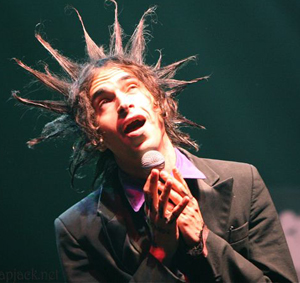 The Birthday Massacre came out strong with lots of energy and great melody. However, the real treat for the night was Mindless Self Indulgence, who started their set with their biggest song, “Shut Me Up.” Fans were screaming every word, event to their most obscure songs.

Frontman Jimmy Urine had them eating out of his hand. At one point he refused to go on unless someone paid him $20. Sure enough, a bill hit the stage.

Urine picked it up and went to the drum riser to exlaim, “We smoke crack tonight!” Later, he stripped down and asked the audience to throw him their clothes, and he even prompted the crowd to use the video setting on the cameras that they had snuck into the venue to record a message that’s currently all over YouTube.