Foals: May 24 @ the Troubadour 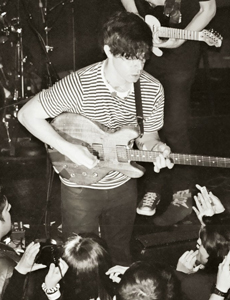 In their first L.A. visit, hipster-friendly Foals greeted us properly and sent us off with a twin tom beating. Twenty-two-year-old frontman Yannis Philippakis was tight-lipped and hard to penetrate, muttering about and – like fellow guitarist Jimmy Smith, who’s lightning fast in the hand – carrying his guitar high on his chest.

He was quite sexy, a bit fey, and despite his mumbles and downward gaze, had this distant way of going apeshit during “Two Steps Twice,” when he tossed off his guitar and fell into the crowd, nonchalantly getting up and stumbling through a sleepy dance after no one caught him, and paying no mind when he put his guitar back on, only to trip on stage. With such coolness, later, he’d knock his microphone to the floor at a beat’s notice.

Live, it’s wildly apparent that Foals resemble the overused Vampire Weekend/Battles hybrid with which they’ve been so frequently pigeonholed, blending math rock detail with a danceable post-punk trance. Their sound transforms from clean and sparse to thick and heavy in an instant, and their energy is far more grand with a visual complement, it being so much easier to get lost in Jack Bevan’s rhythms when you’re watching the band lead you in a flexible bounce.

They’re much too bold for a venue like the Troubadour, which, I suppose, made the night that much more telling of what’s to come.