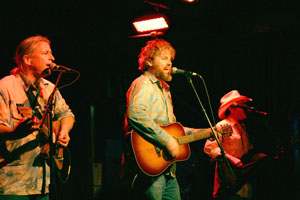 When I got to the ticket window of the venue, the ticket taker told me that the band was already on. I was late. A fact that was exemplified the moment I opened the doors and took one look at the crowd.

As I moved through to find a good vantage point, I couldn’t help but notice all of the dancing that was going on. There wasn’t a dance floor or even an appointed area, but those who wanted to dance did so wherever they felt the urge; and being that this was old fashion country music, it was something that required two.

I See Hawks in L.A. ran the gamut of country-style subject matter, from a song about a guy who loves rocks and the simplicity of living as a miner to a parable of the way it is when the baddest of the bad comes to town (entitled “Slash from Guns N’ Roses”).

I had one of the best times ever at the Echo, and it proved that I had actually shown up just in time.