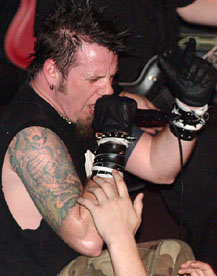 Most people think of metal as lightning-fast guitars, thunderous drums and shrill screams similar to the sound of a hurricane destroying everything in its path, never looking past the stereotype of metal as incomprehensible noise. There are some bands, however, that have used metal as an art form. Mudvayne is one of these bands.

When Mudvayne stepped on the club scene with their 2000 major label debut, L.D. 50, they were soon shelved as trendy nu-metal due to their hellish-looking face paint and standard mosh-pit following. But under Mudvayne’s skin was a well-oiled metal machine waiting to break free from the Slipknot comparisons. The album’s awkward time signatures, piercing bass lines and vocalist Chad Gray’s agonizing screams were enough to garner the band their first-ever MTV2 award.

Mudvayne’s second album, The End of All Things to Come, added another element to the band’s sound as Gray expanded his vocal talent from screaming to melodic singing, adding depth and beauty to the brutality of his bandmates’ music.

Mudvayne’s members shed their identities as paint-clad metal monsters and appeared publicly in bone-punctured bear suits, blood-splattered scrubs and as bug-eyed aliens in red suits. Yet after having toured non-stop with bands such as Slipknot, System of a Down and Metallica, Mudvayne seemed to disappear after their hit single "World So Cold" became a MTV "Headbanger’s Ball" staple.

In hibernation for the past two years, Mudvayne has emerged from hiding with a third studio album, Lost and Found. As a way to thank their fans for their continued support, the band scheduled a string of club performances leading up to the album’s April 12 release date. The tour’s third stop was at the legendary Whisky in Hollywood.

As the lights finally dimmed over the restless crowd, Mudvayne stormed the stage and quickly addressed the already swarming mosh-pit. Clad in black T-shirts, camouflage pants and black ski masks, bassist Ryan Martinie, guitarist Greg Tribbet and drummer Matt McDonough picked up their instruments and waited for Gray’s command to attack the crowd with a sonic fury.

Gray picked up his microphone and with one blood-curdling scream, dove right into Mudvayne’s new single, "Determined." Surprisingly, the crowd screamed every word of the new song along with Gray – a testament to the symbiotic relationship of the crowd and band who played off each other’s energy all night.

After "Internal Primates Forever," Mudvayne revealed to its fans their visual image for their next tour. All the members of the band ripped off their ski masks and were … themselves. No strange costumes or face paint, just the band members in regular rock attire, giving new meaning to "Lost and Found" as it relates to their identities.

Mudvayne gave the crowd its first taste of the new album, playing "I Am In" and "Happy." The sweating fans were also treated to "Skrying," a song rarely played live. The soft song calmed, but the crowd bounced back in a vicious way during "Cradle" and "Death Blooms" as people jumped on the stage and flew into the crowd.

During the band’s performance, Gray continually said he preferred smaller venues to big arenas and thanked the fans for their attendance. He said he wished more people could attend the show, especially the soldiers in the armed forces, as he dedicated "World So Cold" to them.

Mudvayne ended its one-hour set with "Dig" and took a bow for its fans. Finally, it seems, Mudvayne has come into its own style and learned a valuable lesson: Why be somebody else, when you can be yourself?