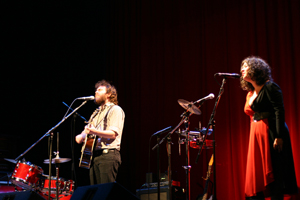 When the curtain opened there he sat, a grown man in a bear suit. My only knowledge of Liam Finn was of the single “Second Chance,” which had chronically been stuck in my head (in a good way). Seeing this man in his bear suit, I felt I would be totally artistically smitten with Finn.

After a few minutes of drum machine diddling the curtain closed. It wasn’t him.

A few minutes later the curtain opened and Finn and Eliza-Jane took the stage sans animal costumes. They put on a really fun show, creating full three and four piece musicscapes with just the two of them and some looping technology.

In fact, the only thing that would have made it better would be a couple of bear costumes.