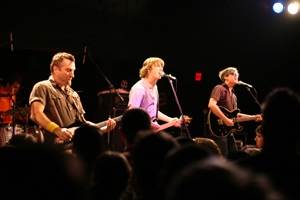 Ever been to a world you never knew existed? Well I have, and the Old 97’s were headlining.

I showed up early so I got to see the whole show from start to finish. A couple of bands opened for them to a crowd that grew to capacity as time grew closer to the main attraction.

Then, Old 97’s came out rocking hard in all their honky-tonk fed grandeur. The crowds cheered with all the exuberance tantamount to the Who reunion tour crowd, which wasn’t really surprising.

What did come as a surprise was the fact every person in the crowd knew every word to every song. To witness such enthusiasm for a band that I had barely even heard mentioned before, really makes you feel a little out of touch.