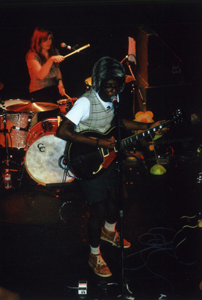 Dev Hayes, a.k.a. Lightspeed Champion, was worried and excited all at once. Telling the audience that he’d been in the bathroom for most of the day, he apologized in advance for a perhaps not so awesome show, his first time performing in Los Angeles with Lightspeed Champion.

It looked and sounded like his excitement beat out his worry after the first few notes. He didn’t stop rocking out for the entire 45-minute set. Playing songs off of the album Falling Off the Lavender Bridge as well as many new tracks, the audience warmly treated Hayes and his band like they were long lost friends – long lost friends who talk, sing and rock out together.