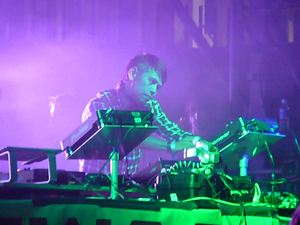 While most were sleeping, 40,000-plus insomniacs threw on their brightest duds and got down to over 40 world-class DJs at the L.A. Coliseum, home to Electric Daisy Carnival ’08, which outdid itself this year with six stages and by far the best line-up it’s ever seen.

Moby and Paul van Dyk were just two of the major acts to take part in the main stage festivities. The other five stages scattered around the giant concrete structure showcased everyone from Goldie to BT, a thumping 4x4 set by DJ Dan and Donald Glaude and the one and only Armand Van Helden.

Some of the most stellar acts of the night came from the small So Sweet Records stage, where Z-Trip threw down an epic mash-up set and Japan’s own Shinichi Osawa blessed us with his phenomenal music and skills for the first time in the United States.