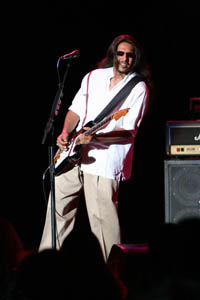 On the road to support their third studio album, Forgiven, Los Lonely Boys arrived at the Greek with Los Lobos to bring their Texican rock to Los Angeles. The sound was great as each member came out with everything they had. From traditional ballads to hybrid rock ’n’ roll songs infused with southern Latin flavor, they captivated the audience.

The crowd ranged from young and old – I even saw a 50-year-old guy wearing a Slayer t-shirt – proving that their music truly has no boundaries. It seemed the only negative thing about this event was that it wasn’t sold out.

This talented trio should have been at a venue that held more, but in a space that would allow them to charge less. I can only imagine what a sold-out crowd would have been like as they belted out their biggest hit, “Heaven.” Regardless, these guys put on a great show.