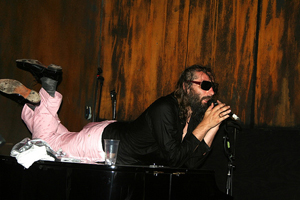 The super sexual and sweat-soaked Sébastien Tellier played one of two exclusive U.S. shows at the Knitting Factory. Tellier looked like a hobo after scrounging though a theater company’s dumpster, donning light pink pants, dark shades and a shimmering silver lamé blazer.

He literally moaned and groaned through tracks off of his latest album, Sexuality, performing some daunting moves with his microphone. The crowd “lit up” as he played the first few notes of his latest single, “Divine,” the track that caused controversy in his native country France for being the only song nominated for the Eurovision Contest that was sung in English.

Tellier took a moment from caressing his instruments to sit at the piano, poetically pounding the keys to his famed multi-album track “La Ritournelle,” where his dramatic pauses captivated the audience into utter silence. Surprisingly, the sexy show was open to all ages.