The Summer That Never Was:
Choosing Betwee Option 1-4 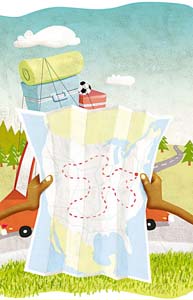 After the Iraq War’s fifth birthday, gas prices began to teeter on the obscene. The end of cheap transportation was near, and there was still so much I haven’t seen. With our suburban tranquility quickly becoming cookie-cutter clutter and the last frontier covered with overpriced lofts above retail space, this past June told me to get out while I still can.

Read Jack Kerouac. Follow his reckless, unproductive example. Fill up the tank and start driving east, spend the last of your cash at a dive bar in a dusty western-prop of a town and end up somewhere east of the Mississippi just in time for school to start. Have an adventure – hell, have 10 – and see as much of this crazy country and its messed-up people as possible.

“The Last Great American Summer,” they billed it; and I started out with the best intentions:

Option 1: Quit all my jobs, abandon my apartment and fly to Hawaii with nothing but a beach chair-backpack full of bathing suits. A vagabond friend of mine started squatting on the sand in Hilo last year and swears he’ll never buy a ticket home. Keeping in touch through MySpace, he suggests I come for a few months, help him weave baskets for tourists out of palm fronds and see if I like “the life.” His default photo shows him strumming a ukulele at sunset, his giant “WISCONSIN” chest piece ebullient against the dusk, and I’m jealous (not of his tattoo choices).

Option 2: Run my car into the ground. Quit all my jobs, abandon my apartment, make a list of all the places I’ve never been and start driving. The list includes rolling down Route 66 in my Mazda to typical cities like New Orleans and Philadelphia, then veers into the novelty when I start thinking about all the Omaha suburbs Tim Kasher talks about in obscure Cursive songs and the wooden shack in Nowheresville, West Virginia where my great-grandfather was born. Decidedly, one long, lonely road trip.

Option 3: Move to another city. Quit my jobs, sell everything except whatever fits in my car and drive to Seattle with a bicycle strapped to the roof. Wander clueless into downtown suicide-central, sell my hooptie (after it’s unpacked, of course) and live a new life riding fixed gears and wearing scarves among naturally growing trees. My best friend cashed a free flight voucher she received in a gift-pack bribe and agreed to meet me up there. Her plans are to show up with just a sleeping bag and stay in hostels until a job and a boyfriend materialize.

The operative idea behind these fantasies was “winging it,’ which sounds great after tackling 23 units last semester, but is obviously only OK for homeless veterans or trust-fund babies. And once I realized that walking out of work one day and ditching my lease meant not having a job or a definite place to live, I got cold feet.

I couldn’t do it. I wussed out. However you want to say it, I couldn’t get enough money to do any of my reckless Great American Summer dreams, so I stayed in Los Angeles – the festering overcrowded city of my birth – worked like a sweaty, miserable dog, fell in love with a boy from the Northwest (which kind of turned into a backwards Option 3) and tried to not breathe in too much smog.

With school starting soon, the opportunity has passed. My stress rash is still raging, I’ve eaten at Café 101 so many times I’m finally sick of sweet potato fries and for every hour of driving, I’m averaging two middle fingers (down from four).

Yes, summer is over, and I’m not anywhere east of the Mississippi. There were no Council Bluffs, Iowa or Sacramento stop-offs for me in the last two months. I stayed where I am and now I know that it’s exactly where I need to be.