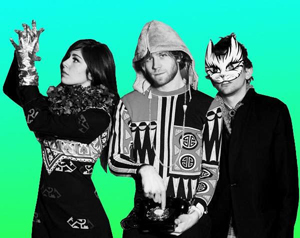 In their last performance on their tour with Pink, Chairlift ripped it up and wooed the crowd with their soothing yet energetic beats. While Chairlift’s music is verging on too relaxing and dangerously melodic, there was a constant undertone of funk energy that sounded like a second cousin of the Black Keys.

Caroline Polachek, the lead singer and keyboardist of the Boulder natives/now New York jam trio, said she was nervous prior to their act. Maybe this played to her favor and resulted in the kick ass show; anybody who was lucky enough to witness Chairlift would very likely tell you that she was going off. She oozed sexuality from start to finish with a voice from the heavens and tambourine throw downs throughout, leaving many of the guys dizzy and disoriented.

Presently, Chairlift’s fan base may be small and tight, but don’t be surprised if next time they come through town they’re headlining and banging on a larger tambourine.