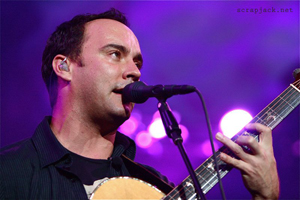 Two sold out nights at the Staples Center for any band is a feat in its own, but imagine taking the stage after one of your founding members, your band mate of 15 years, has passed on?

Just four hours before the show on Aug. 19, “LeRoi Moore gave up his ghost,” as Dave Matthews so eloquently put after ending the first song of the night, “Bartender.” The crowd reeled in shock as the words sunk in. Matthews was short and to the point, he wanted to get into the next song, “Proudest Monkey,” which was also chosen due to the occasion, as was the rest of the set.

The band played their hearts out with tears in their eyes; occasionally slipping past their eyelids and making it across their cheeks. After finishing one song, Matthews let us all in when he sorrowfully spoke the words, “You don’t know how hard this is,” before retreating back to the drum riser with a yell that was heard across the venue.

The evening went on, and the songs told the story of seven men that were hurting more than they had ever imagined possible. Each song was beautifully sad and played with the skill of professionals.

Night two was a completely different feeling. Instead of beating the heavens for a reason why their founding brother had to leave this world so early, it was a celebration of his life. It was like watching seven best friends jam for three hours in their basement with no one else in sight.

The music was bigger than ever, and when Matthews talked to the crowd it was like a welcome friend came down to hear what was going on. He even said to the crowd with a big smile, “I don’t know if we should do this ... But, LeRoi hated playing this song,” and went into “#41.”

Anyone that went to both of these nights saw something that was not only emotionally gripping, but beautiful as well.