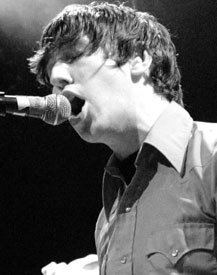 When you say "pop-punk" nowadays, people conjure images of liberty spiked hair, facial designs done in eyeliner and pink suddenly becoming the new black. Say "emo" and you get all of that – plus collared shirts and V-neck sweaters. Every so often, however, a band comes along that takes everything you think you know about them and the genre they represent and smashes it with one giant, rock guitar.

The Sub City Take Action Tour – which supports National Hopeline Network, a suicide prevention organization – takes on some of the hottest bands every year that embody the best of pop and rock, and aren’t afraid to take a stand.

Orange County’s own Melee started the night off on a good foot with its brand of piano-driven pop, easily working the crowd into a head-bouncing rhythm as lead singer Chris Cron sang passionately while attacking his keyboard. Closing with "The War" off their Everyday Behavior album, the band proved that pop is anything but a bad thing and set a high bar for following acts.

Hopesfall took the stage next, playing a set full of mixed signals. While guitarists Dustin Nadler and Josh Brigham valiantly rocked out, their efforts were sabotaged as singer Dustin Forrest did a lot of standing around (epic and dramatic standing, but standing nonetheless). Forrest only served to keep Hopesfall from having any kind of continuous flow and surely kept the crowd at a loss for what to do.

Having lately toned down his caricatured voice to something less nasal, Anberlin frontman Stephen Christian displayed himself as a truly engaging performer, something that was seemingly hidden under the novelty of his past singing style. Definitely the most energetic performance of the night, Anberlin showed great potential to be one of the mainstays of modern rock.

Hawthorne Heights then delivered cliché emo songs with the same emo lines we’ve heard a million times in a million other emo songs. Razorblades and broken hearts … whatever.

Then there was Sugarcult. Though they write catchy and infectious albums, the band can be hit-and-miss with their live show – but leave it to them to pull out all the stops and hit the proverbial homerun when you expect them to strike out.

Vocalist Tim Pagnotta and guitarist Marko 72 are undoubtedly the heart of this band, with a charisma and charm that easily flows out into their audience. They’re just nice guys, so even if they sound less than perfect live, that’s OK, because you’re into the show and you and the rest of the crowd are sharing a connection with the band that other bands just can’t convey. It’s that ability to make an instant follower out of new listeners and remind old ones why they love the band so much that insures that Sugarcult will be around for a long time.