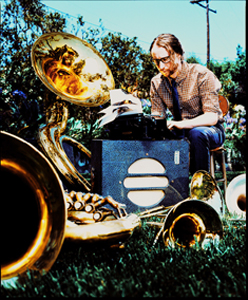 A show for all the senses, from the mind of Michael Einziger came a creation to rival his last departure from his main gig as guitarist for Incubus. A few years ago, Einziger unveiled Time Lapse Consortium, and now he has collaborated with a 60-piece orchestra to bring his composition, entitled End.>vacuum, to life.

It wasn’t just the amazing nine movement composition being flawlessly executed that stole the show, it was the real time, 3D-projected imagery that took this night to a level all its own. With the assistance of a longtime friend, Andrew Schwartz, Einziger was able to let the audience actually see the music.

Schwartz’s effects made it seem like the orchestra was levitating, while the walls took on a life of their own. This groundbreaking feat was performed appropriately in UCLA’s Royce Hall to a crowd of celebrities, such as Anne Hathaway, Jonah Hill, Brandon Boyd, Chris Kilmore and many others.

The usage of newly designed special 3D glasses really made the night, because they actually work out in “real life.” Einziger will bring End.>vacuum to more locations in the future. For information, visit endvacuum.com.