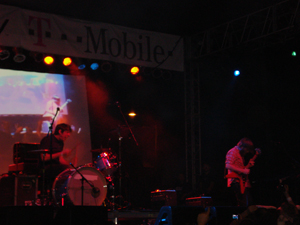 But I’m not complaining that much. The party atmosphere and good vibes generated by all the attendees remain the same. And getting to see the stellar groups that performed was a perfect way to bring summer to a close.

Saturday highlights were the Entrance Band, Menomena and, of course, Broken Social Scene. The Toronto collective shared the fact that their first gig was actually at the Silverlake Lounge and, despite technical problems, got the crowd moving to “KC Accidental,” “7/4 (Shoreline)” and “Anthems for a Seventeen Year Old Girl.”

Cold War Kids closed out the evening with a few new tunes from their forthcoming Loyalty to Loyalty album. But the Black Keys stole the entire festival with the final set on Sunday.

The Ohioans stuck to songs from their older albums (namely The Big Come Up, Thickfreakness, Rubber Factory and Magic Potion), which pleased their OG fans, and the entire crowd went nuts for “Strange Times” from their latest, Attack & Release. Vocalist/guitarist Dan Auerbach introduced a Captain Beefheart cover (“I’m Glad”), saying, “This is for a man we love.”

Auerbach summed up the entire festival with these words: “It’s kinda cool out here. This is a nice block party.”