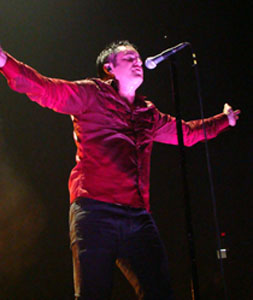 With three new albums to tour behind, Nine Inch Nails formed an eclectic set that included many songs from Year Zero, Ghosts I-IV and The Slip, in addition to classics from the Pretty Hate Machine and Downward Spiral eras.

Never one to disappoint, Trent Reznor added a spectacular new visual element to this tour. The three LCD screens that usually play footage behind Reznor were replaced by an entire stage decorated with strategically placed fluorescent lights and two giant LCD screens that veiled the band in a 3D-type atmosphere.

One of the highlights came when images of George W. Bush and John McCain flashed on a giant LCD screen behind Reznor as he ripped into “The Hand That Feeds.”