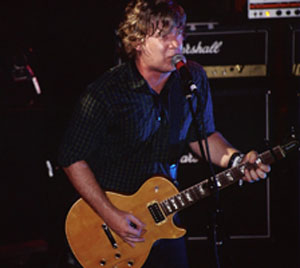 Having found fame with a bit of mockery like “Popular” at the height of the mid-’90s alternative phase, it would have been difficult to imagine a 41-year-old Matthew Caws leading a packed room of fans half his age in praise of love. But it happened at the Troubadour.

Bass player Daniel Lorca was out with an injury, so Jose Galvez (Ozma) and Gram Lebron (Rogue Wave) filled in on bass and keyboards, respectively. Drummer Ira Elliot played with hokey but magnificent light-up drumsticks – once, anyway – and Caws invited us to cheer for rainy days (“Blonde on Blonde”) and join in on all sorts of “aaaaahhh” action (“Weightless”).

But the best part of the show was the privilege of hovering above, on the venue’s balcony, as the entire floor moved from side to side in a perfect half-circle. With all side-stepping like a couple hundred doo-wop singers – you know, because Nada Surf are soulful, or something – it was actually bizarrely beautiful to watch these otherwise mellow fans reveal a collectively carefree attitude. A lack of “Popular” in this set, which went on for nearly two hours, only assisted in making smiling hippies of us.