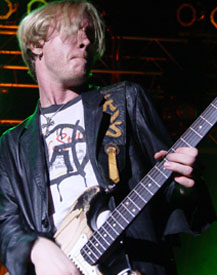 The spotlighted guitarist flailed about the stage in view of hundreds packed in to see him entertain while sporting short-cropped, dirty blond hair and everyday attire comprised of blue jeans, a black ’n’ white tee and tennis shoes. You knew he was somebody based solely on the number of guitar changes he made during the fiery set at the prestigious Downtown Disney venue.

Kenny Wayne Shepherd, once a teenaged blues-rock prodigy, is now a young man tearing up clubs on the second leg of his promotional tour for The Place You’re In (Reprise), his fourth CD produced by Marti Frederiksen (Aerosmith) and mixed by Andy Wallace (Nirvana).

This studio collection follows the Grammy nominated Live On (1999), previously recorded platinum seller Trouble is… (1997), and debut gold standard Ledbetter Heights (1995), offering a wink to controversial 1940s blues legend Huddie "Leadbelly" Ledbetter. Seemingly, then 17-year-old Shepherd’s homage was phenomenal, but perhaps not unexpected considering the "king of the 12-string guitar" rests in a grave where Shepherd grew up in Shreveport, La.

On this tour, the newly appointed Los Angeles transplant again enlisted the accompaniment of gritty Noah Hunt on vocals and versatile Jimmy Wallace on keyboards. The group rounded out with Shaun Hague on lead and rhythm guitar, Michael Devin on bass and Bogie Bowles on drums.

The audience witnessed Shepherd himself, mid-tour, singing for the first time, as well as the more rockin’ than bluesy side of the guitarist highlighting songs from his latest record like "Hey, What Do You Say," a sweet ballad flavored with Allman Bros. riffs. "Let Go," a mid-tempo popular song showcased dual vocals by Shepherd and Hunt and strong rhythm accompaniment. Shepherd’s guitar solo was commendable but too brief to reveal his full range.

A highlight of the concert was the new "Alive" Top 10 hit with a triple swell of guitar sounds surrounding Shepherds’ vocals. Despite being a ballad, the live rendition packed power. Also a crowd-pleaser was "Deja Voodoo" from his premiere release, a song so well co-written by the artist that it would’ve worked had Shepherd played ukulele. "Riverside," taken from Shepherd’s root collection, also flowed with riveting licks.

Whether Shepherd picked up the red, white or tri-colored guitar the instrument sang. Fans saw him play it at his belly and behind his neck, and with and sans the whammy bar. Apropos it was to see these well-rehearsed musicians stand together for a deep bow following the sizzling encore like a thespian troupe after a long theatrical run.