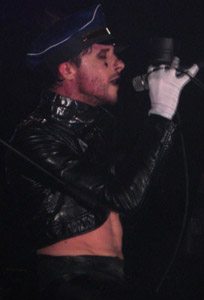 A packed house of glittery cabaret-goths was treated to an explosive event at the El Rey. Former Sneaker Pimps founder Chris Corner, as his alter ego X, was a ferocious fireball, darting about the stage like a madman, both jumping from instrument to instrument and whipping the crowd into frenzy as he crooned to perfection.

But it wasn’t all about Corner. His band was a force to be reckoned with as well, executing perfect harmonies and dodging Corner as they careened about like renegade bullets.

Racing through a powerhouse set encompassing the high points of the last two albums (just now released stateside), IAMX delivered everything from “The Negative Sex” to the rarely performed but gorgeous “This Will Make You Love Again.”

Corner returned for an encore clad like a twisted ringmaster, offering up “President” and “After Every Party I Die,” during which he showed bravery by reverse stage-diving onto a throng of screaming girls. Those who stuck around were treated to a surprise acoustic set of exceptional beauty, which proved the full extent of the songwriting prowess and versatility that Corner possesses.