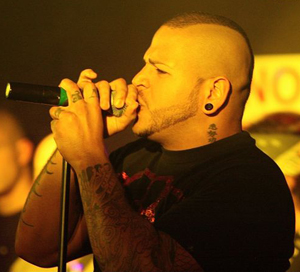 Ten years after the tragic death of Lynn Strait, Hollywood waited with bated breath to see what the founding members had in store for them. Replacing a frontman is probably the most daunting task any band can be faced with.

Snot’s new frontman, Tommy “Vext” Cummings (formerly of Divine Heresy) took to the stage with his hands in the air, whipping the crowd into a frenzy as the immortal words came over the PA: “Fuck the record, fuck the people!” Then with the roar of one word, Vext secured his place in the band forever, “Snot!”

The music blasted, and the people went nuts. Vext seemed nervous at first, but as the show went on he became more comfortable and the crowd seemed to grow accepting of his place at the helm of this unstoppable wall of sound.

At one point, Vext dropped his hard exterior to almost break down and let the audience know how much this means to him: “I grew up listening to this band. I used to work as a security guard here at the Keyclub and would watch Snot on stage and dream about being in that band, and now here I am.”

It’s tough to see someone try to take over a band that had an iconic figure like Lynn Strait. Only time will tell if Vext has the power to bring Snot to the level that they were destined to be at over 10 years ago.