The Felice Brothers: Oct. 22 @ The Troubadour 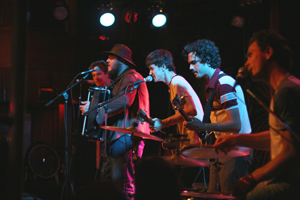 Only the mountains could produce a ruckus such as these boys. The mountains are the Catskills and the boys are brothers, the Felice brothers to be exact. And they sure can throw one hell of a hootenanny.

Simone, Ian and James Felice along with Christmas and Farley (both of whom they picked up along the way) didn’t let the bright lights of West Hollywood’s Troubadour citify their show. Honestly I don’t know who is who, but they all give a great show.

The main vocalist has a tone a lot like Bob Dylan, but with way more enunciation. The big guy in the group played one hell of a squeezebox (accordion to us city folk) and was quite the ladies man; even the drummer strapped on the guitbox (a.k.a. guitar) for a couple of songs. Add some amazing washboard playing, and you’ve got yourself one rip roarin’ good time.