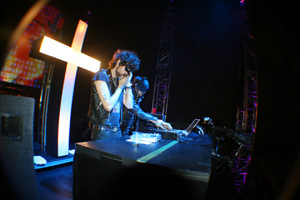 The L.A.-based HARD festivals could be one of the fastest growing, best electronic/DJ-based fests around. Their sold-out Halloween extravaganza, HARD Haunted Mansion, demolished all competition. Four stages were scattered about Shrine Auditorium with most fest goers decked out in full costume, celebrating the occasion.

DJ AM generated the biggest buzz of the night, appearing in a pyramid of lights dressed as Thomas Bangalter of Daft Punk. Crystal Castles, Justice, Deadmau5 and Boys Noize also delivered sets that proved their stature as topnotch electronic artists. Next up HARD Fest NYE, but with a line-up as spectacular as Haunted Mansion, I don’t know how it can be topped.