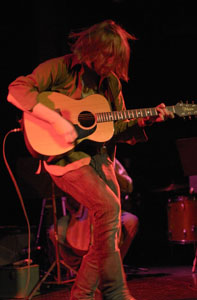 One factor that makes Port O’Brien so interesting is the combination of a traditional country, folksy style mixed with contemporary indie rock. And with the release of their second album, All We Could Do Was Sing, Port O’Brien seem to fit into a growing trend. Artists such as Bon Iver, Browerbirds and Okkervil River along with Port O’Brien seem as equally influenced by log cabins and banjos are they are by American Apparel and distortion pedals.

Of equal curiosity is Port O’Brien’s lead singer. Van Pierszalowski commanded attention throughout the night’s performance. Much of his attitude and style seemed to channel Kurt Cobain. He played with focused intensity as he jumped around stage in a manner befitting the late grunge icon.

For their closing number they handed out pots, pans and other random metal objects to make the last song as interactive as it was monumental