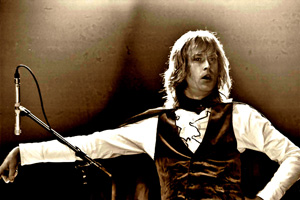 On their second of three L.A. dates, Sweden’s T(I)NC are wedged between skate-rappers 3OH!3, whose best line is “Do the Helen Keller and talk with your hips,” and a chunk of that genre which refuses to call itself emo, Taking Back Sunday, who’ve recently recruited Facing New York’s Matt Fazzi on guitar.

T(I)NC now resemble a crop of extras from Beyond the Valley of the Dolls – purple suits, Dennis Lyxzén in a cape, the group one haircut shy of looking 40 years too late (said exception being bass player Inge Johansson, the perpetually clean cut goth). Per usual, there’s “Up for Sale,” “Capitalism Stole My Virginity” and “Black Mask (2004).” But in an unexpected turn, Lyxzén tells us he’s “just not feeling it tonight – too much bad politics, bad music, bad haircuts.” A swipe at his tour mates and their audience, and it completely goes over the heads of all. So the band launches into “Waiting for Salvation,” and Lyxzén jumps off an Orange amp, well over the head of guitarist Lars Stromberg, whose Mick Avory face is now covered with the history of Southern rock, and a complete set of speakers on stage right goes out, perhaps in an odd turn of karma. They’ve done their best, but by the time their fists hit the air, they haven’t earned the same applause as the dope beats or whatever of 3OH!3.