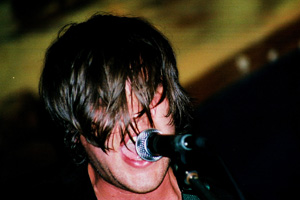 Though the galloping rhythm of Abe Vigoda was pushed back from its previously listed headlining space and into that sophomore hole known as the supporting slot, the Smell was already quite full when they took the stage early on and after rather friendly rockers Nodzzz.

There was dissonance. There was a pit! And there was Sweden.

New York’s Vivian Girls, who visually represent Williamsburg, played dumb, open-chord punk rock as it’s meant and harmonized with apathy like a riot grrl act straight out of the ’90s. They’re nice girls in banter and slightly vicious in their delivery – an odd match, then, but a perfect lead-in for Sweden’s Love is All, who are perhaps the happiest looking group to play at the Smell in some time.

Fronted by dainty Mia Farrow look-alike Josephine Olausson, whose accent is sweet and thick, and supplemented with the sax action of James Ausfahrt, whose glasses are perfectly ’80s, Love is All seemed to bring together the mods and rockers for a big merry dancefest, with everything from their debut’s “Talk Talk Talk Talk” to a cover of “I Ran” (off their recent Covers EP). Every act on the bill was a joy not to be missed!