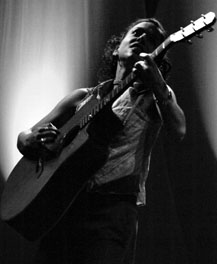 Ani DiFranco is "32 Flavors" and then some. She is a phenom who began composing music at the age of 14, had written more than 100 original songs by the time she was 19, and continues to average about 200 live shows a year.

By the age of 35 and after 15 years in the music industry, she’s created her own record label and independently recorded and distributed approximately 22 albums. I get tired just thinking about how busy and driven this woman is!

It was announced in December that her 2004 release Educated Guess – written, recorded and mixed solely by DiFranco – was nominated for two Grammy awards. The record was up for Best Contemporary Folk Album and Best Recording Package, but DiFranco was already getting set to put out her next album, Knuckle Down, which came out last month.

The talented singer/songwriter is energized by some unknown and incomprehensible force – a potent energy which streamed seamlessly from DiFranco to the crowd and back again on a recent Tuesday night at the Avalon. The stage was reserved solely for DiFranco and her guitar, and backed by standing bass strummer Todd Sickafoose.

Most everyone tries – often unsuccessfully – to wrap DiFranco up into a neat little package. Folk. Punk. Straight. Bi. Married. Divorced. Political. Personal. Truth is, she is a little bit of all those things, depending on the moment, depending on the tune.

On this night, DiFranco was mostly a poet, a musician and an artist. She played 19 songs in just under two hours for fans who would have stayed all night long. She has the type of emotionally attached fans who scream out sporadically in ecstasy in the middle of a song and then start to cry in the next; entrenched fans who discuss the lyrics mid-song; crazed fans who get pissed when she is too feminine or not political enough. Her following is known for its intensity and – rest assured – plenty of them are Los Angelenos who came out to support this Buffalo babe.

The set included a heavy dose of old stuff that her longtime fans ate up with delight, along with a handful of songs from her Knuckle Down, including "Manhole," "Lag Time," "Knuckledown," "Paradigm," "Studying Stones" and "Recoil."

DiFranco has two primary weapons of mass destruction – her voice and her guitar. Her vocal style is simple and intricate all at once. Most of her songs don’t have a predictable bridge, chorus or pattern. It’s the intonation of DiFranco’s voice that constructs and controls the arrangement, and it’s her guitar that sets the dramatic backdrop.

Hammering her guitar with force and passion throughout her set, DiFranco had to shake out her strumming hand between songs. At one point, she claimed that she needed to rest her hand and asked the crowd if someone would like to hear a poem. Shouts and slurs sprung out from all ends of the venue as she chuckled in amusement, reciting her own spoken word, entitled "Coming Up." Even this poem, with no musical support, slid like honey from her lips in an emotive display.

Andrew Bird – a jack-of-all-trades musician who plays everything from the xylophone to the violin – opened the show for DiFranco and then joined her and bassist Sickafoose onstage for three songs: "Here for Now," "Studying Stones" and "Recoil."

DiFranco closed the night with one of her most critically acclaimed tunes, "32 Flavors," from her 1995 album Not a Pretty Girl. Thirty-one flavors might be enough for most consumers, but certainly not for DiFranco fans.