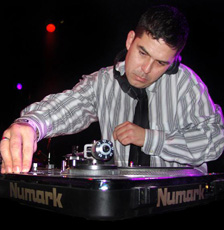 Most people come to Los Angeles and never really manage to assimilate. Ask anyone; your friends, neighbors and colleagues all have stories about someone they know who arrived in the City of Angels with stars in their eyes, only to wind up working at the local burger joint back home six months later.

Still, for a lucky few, Los Angeles is the place where dreams come true and legends are made. And if DJ Stephen R. has anything to say about it, this is exactly what he’s going to accomplish.

Stephen Ruiz commanded worlds of attention on the club circuits in both San Francisco and Dallas, Texas. Performing and recording under his own name and the moniker Zygote, he amassed a stockpile of accomplishments that rivals those of pop culture darlings like Steve Aoki and Samantha Ronson.

“When I was in Dallas,” says Ruiz, “I threw a party called Hot Flash, which was pretty much free-form. It was basically just a bunch of kids down to party.”

That love of escapism and the ensuing notoriety that cropped up in its aftermath has allowed DJ Stephen R. the chance to branch out into wider areas. Drawing inspiration from acts such as Tortoise, KISS, Brian Eno and Daft Punk, Ruiz’s delivery is an amalgamation of the ultra-hot coupled with the obscure, with one feature that’s inextricably interwoven.

“If there’s actually a theme that runs through my production style it’s electro,” he says.

Sticking to his winning formula has even allowed him to tour the country, dropping his larger-than-life sound on new audiences everywhere.

“What I’ve noticed when I travel is that more people are into different types of music,” he explains. “Like now, you’ll actually see skinny white kids dancing to hip-hop.”

Therein lies his mission for his new home in Los Angeles: “I’d like to see one party that’s sort of all-encompassing; that’s like a different theme each time you do it.”

Ruiz has settled into a spacious Silver Lake apartment overlooking Sunset Boulevard with his girlfriend, Lindsey. Like a scholar, he’s studied the culture of this town with an eagle eye, assessing what he can bring to the city’s nightlife.

“I have a lot of respect for anyone who can keep a party going and get people to actually show up,” he admits.

He, along with collaborators like New Berlin and Anticon Records, will be launching an all-out attack on the event planning and local arts/music scene through Architects and Heroes. This collective is part record label, part podcast and pretty soon, “Architects and Heroes will be starting to throw parties,” says Ruiz.

For anyone in doubt, DJ Stephen R. has already set his legacy into motion, spinning at the recent Create/Fixate event in trendy downtown Los Angeles. The night boasted the best and brightest in art, sculpture and design. And there’s more to come.

“We have an event coming up in Silver Lake that will feature Sean from Anticon Records. It’ll be a mix; it’s a live show and an art event,” he explains.

Ruiz has also been in the studio, plugging away on an EP of remixes that will drop before the end of the year.

Just don’t be surprised if you’re at a gallery opening or a massive party somewhere in town and the sickest beats you’ve ever heard fill the room and get everyone dancing. Simply look around, and find the guy behind the DJ booth sporting a Cheshire grin. More than likely, you’ll be looking at Stephen.

For more information, visit myspace.com/djstephenr and the Architects and Heroes blog at architectheroes.blogspot.com.

LA Underground
OctafellaSoul: Born in a Back Alley of Los Angeles
3,231 views

LA Underground
KOLM: The Confluence of Music and Art
4,477 views

LA Underground
The Material: Tools of the Trade
5,485 views