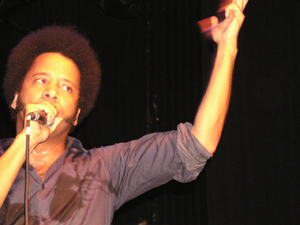 Courage. Strength. Conviction. Human Rights. Solidarity. Passion. These are words stamped proudly on the music of the Nightwatchman, fronted by singer and guitarist extraordinaire Tom Morello. Though many know Morello from his Rage Against the Machine and Audioslave days, the Nightwatchman represents the musician at his purest: folk rock wrapped in lyrically charged, guitar-pounding riffs.

Songs such as “Whatever It Takes” and “One Man Revolution” were highlights, along with an appearance by Serj Tankian of System of a Down who joined Morello on “Lazarus on Down.”

Boots Riley, the funkified rapper from the Coup, sang the controversial winner “5 Million Ways to Kill a C.E.O” followed by “Wear Clean Draws,” which brought a heartwarming chuckle to fans. Later, Riley jumped onstage during the Nightwatchman’s set to debut music from Morello and Riley’s little known band Street Sweeper, set to release their album in 2009.

The duo of Riley and Morello was a natural as both use music as a way to inspire others to fight for the common good, encouraging fans to start in their own hometowns. What better way to make a change than snagging a seat on the Nightwatchman’s The Fabled City Tour?