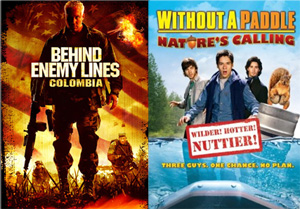 If every new year brings a more offensive straight-to-video bastardization of mediocre movies than the one before it – like 2007’s Bring It On: In It to Win It or American Pie Presents: Beta House – then why would I be stoked about another 365 days?

This coming year’s lineup might as well be 2008 II: Same Old Crap (or better yet, 2000 the Eighth: 2009), but I’m not depressed for this spring’s lineup as much as a concerned popular culture enthusiast who is beginning to see a correlation between the degeneration of the American conscious and the grotesque influx of direct-to-DVD movie sequels.

With all of the keyword clichés and questionable new casts, the next three months will be a treasure trove of rehashed ideas, and I’ve picked the four worst decisions this side of Meatballs II so you can spare your DVD player the misery.

With a DVD/Dog Tag gift package available on wwe.com and professional wrestling star Mr. Kennedy™ as its big name actor, Behind Enemy Lines III is not even in the same room as the 2001 original. As the second direct-to-video sequel released in three years, Colombia features the usual Third World civil war and unnecessary American involvement, but none of the perpetually broken-nosed Owen Wilson and Gene Hackman that made the first one tolerable.

Without a Paddle: Nature’s Calling

Two best friends and ¬– according to the trailer – “one British guy” (with a not-so-British accent and a briefcase full of hair products) go on a wilderness mancation where a series of things happen to them that they are ill-equipped for and cliché hilarity ensues. The only difference between the original Without a Paddle is that Seth Green is now tall, dashing and supposedly from across the Pond.

Against the Dark (formerly Last Night)

OK, it’s not really a sequel, but every Steven Seagal movie is basically the same ninja-filled excuse to show off Seagal’s Aikido prowess for a few hours, and although Against the Dark is considered a horror film, the presence of a katana sword reeks of movies past. Against the Dark will be like Blade meets 28 Days Later and Quarantine’s love child, but with Steven Seagal instead of Wesley Snipes and post-apocalyptic Chinese flesh-eating vampires instead of English-speaking ones.

After seeing them about 30 times apiece and meeting similarly inept people in real life – watching the first two Ace Ventura movies back to back is as obnoxious as sitting in the room with a misfiring smoke detector for four hours. The third installment, in which a chubby 12-year-old plays an over-exaggerated version of the already over-exaggerated character, is a perpetuation of Jim Carrey’s unprofessional, Hawaiian shirt-filled legacy except there are no Dan Marino cameos or intriguing bat guano mysteries.