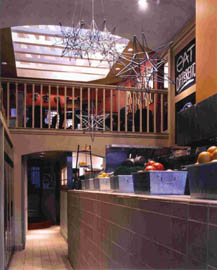 During the recent "Wrath of God-like" rainstorms, I was fortunate enough to indulge in two of my favorite pastimes – overeating and being lazy. With the clouds parting and the angry gods returning our divine right of sunshine, I felt it was important to lift my spirits and cleanse my body of the previous two weeks. As I’d rather jam a carrot stick in my eye than go back to Real Food Daily, I needed to find another vegetarian restaurant option. Enter Native Foods in Westwood.

Although I have a serious addiction to animal flesh, I’ve had too many amazing non-meat Indian dishes to know that meat is not a necessary ingredient to eating well. Therefore, I had one question about Native Foods: Is the food good enough that I would willingly come back to this restaurant as a confirmed card-carrying carnivore? The answer is a resounding "Yes."

I enlisted the help of the closest vegetarian I know, April, who was a vegetarian for a few years and now eats meat with the voracity of a large puma. Good enough for me. I needed someone with a large enough appetite to get through the extensive menu at Native Foods. There are salads, of course, but the fun stuff is their non-meat alternatives to some of my meaty favorites, such as hamburgers, Philly steak sandwiches, tacos, chicken burgers, pizzas, chicken wings and beef satay.

The reason that Native Foods works is not that they’re trying to create foods that taste exactly like beef or chicken, they’re making food that tastes better than beef or chicken. Take the Chicken Run Ranch Burger, for example. We’ve all had the poor excuse for a chicken sandwich at Jack in the Box, Burger King, McDonalds, and others. In fact, my fingers can barely type the words without that feeling of nausea that accompanies a visit to these so-called "restaurants." At Native Foods, their soy version of a chicken sandwich is crispy-fried with tomato, lettuce, onion and ranch dressing on a whole-wheat bun. Yes, it tastes like chicken, but it’s not trying to be chicken. Wow, that was deep, very Zen-like. Let’s just say it tastes damn good.

Needing to sample some "beef" since I already had the chicken covered, I went with the Tijuana Tacos. Soy stepped in for beef once again and did not disappoint. Topped with salsa fresca, amazing guacamole and Native Cheese (made from cashews and sunflower seeds) it had the tasty feel of what a taco should be, without the dripping grease running down your arm.

April ordered the Soul Bowl, which is a large bowl of rice, red beans and steamed veggies with BBQ fried chicken. That’s another thing worth noting about Native Foods that you may not think when you hear "vegetarian" – the portions are huge. No one is eating tofu slivers with a side kale and a sliced grape for dessert.

Speaking of dessert, we sampled two of the parfaits. April described the Key Lime Parfait as "heaven." Indulging my peanut butter addiction, I went with the Peanut Butter Parfait, which was smooth, creamy and delicious.

The atmosphere at Native Foods is casual and inviting. You order and pay at the register, and tables are available on the second floor where your food is brought to you. Plenty of "to go" ordering goes on as well.

So, I say to all my meat-eating brothers and sisters, when you need a break from meat, fish and fowl but still want a great, fulfilling meal, go native – Native Foods, that is.