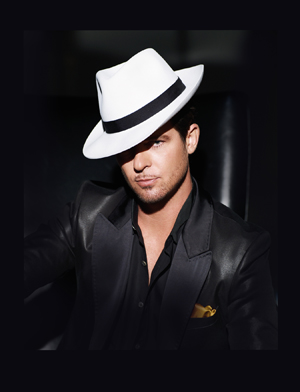 There are many interesting tidbits about the blue-eyed soul singer Robin Thicke. He is the son of Alan Thicke (“Growing Pains”) and husband of Paula Patton (Déjà Vu, Idlewild), as was confirmed by the young lady behind me in the audience screaming, “Paula is soooo lucky!” when Thicke strutted his sexy stuff on stage.

The most interesting fact though about tonight’s concert was watching Thicke’s fans – shrieking young black females – swoon and gyrate to his songs. At least three pairs of panties hit the stage in a span of 30 minutes. Amazing!

Thicke has the magic “it” factor that makes the ladies lose their minds. It doesn’t matter that his voice and songs are mildly cheesy or he can’t really dance, the women adore him.

He crooned songs from his second album (the one he’s best known for), The Evolution of Robin Thicke, and also from his latest, Something Else. But of course, everyone, including me, was waiting for his humongous hit, “Lost Without U.”

There’s something irresistibly soft and sexy about this tune. The way his high-pitched vocals tiptoe around the melody. By the looks of elation on every woman’s face in the packed crowd, tonight solidified Thicke’s standing on many most-loved lists.Z

Opening for the very soon first-time father-to-be was Chrisette Michele. Another R&B gem, Michele also harkens back to a bygone era with her jazzy old school soul.

Between Michele and Thicke delivering oodles of love odes, and ladies throwing their panties on stage, tonight was a bona fide lovefest. Couples were cooing, romantics hugging and after a few encores, still no one wanted to leave when the lights went on.

Thicke’s been at it for a while, and fortunately, he’s reaping the sweet rewards of his hard work.