DEAR GEORGE HERBERT DUBYA: A Letter to the Outgoing President 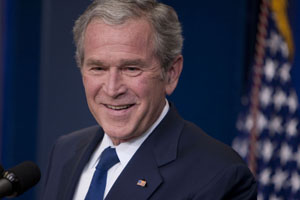 You don’t know me, but I know you. I’ve been watching you these last eight years and, my, how time has flown. It feels like only yesterday when I saw that plane crash into the second World Trade Center while getting ready for school, then sat in first period while my 10th grade English teacher hysterically cried on the phone with her mother for two hours.

It was pretty lame that you accused your friend Bin Laden for the hijackings and that instead of finding him, you ¬– for no reason – decided to invade Iraq, but I want you to know that I’m not mad anymore. I’m not even pissed about the whole “Mission Accomplished” banner after a week of ground patrol or the fact that you pronounce “nuclear” like Homer Simpson does.

Because now that it’s President Obama’s first week in office, I’m feeling positive about the general future of humanity enough to finally make peace (something you should look into) with all of your mistakes, and I want you to know there are no hard feelings.

In fact – and I hate to say this – but it’s weird not having you around. You were the first president of my adult life (as they say, you never forget your first) and the attraction was immediate. Watching you speak in a public setting was like following Britney Spears and Kevin Federline’s courtship – knowing that the end result won’t be pretty, but damn, it’s funny to watch.

Since November’s election, however, I’ve followed your pleas for a fair view of your administration – since leaving a “29-percent-approval-rating” legacy is of genuine concern – and listening to the uncharacteristically introspective moments and half-assed apologies at your final news conference last week have definitely helped in this forgiveness process.

I’m not sure who will reinforce my dislike for our government or how I will survive without all those fears of the apocalypse, but I will always remember your deer-in-headlights look, that creepy little chuckle you do when you know you’re wrong and how you angered a whole nation into voting Democratic.

Don’t worry about how history will look back on your time as president. Your legacy will live on in “Quote-A-Day” humor calendars, Photoshopped images comparing you to a monkey and rolls of toilet paper with your face on it.