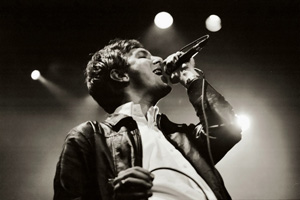 Hamilton Leithauser’s still capable of throwing a punch with his eyes – see “All Hands and the Cook,” where nary an opening word can be understood from within his grandmotherly rasp – but his stage persona almost seems friendlier than in years past, and rather than look like he’s prepping for a fistfight, he now periodically smiles, has a thoughtful look around and takes a swig from his shit beer. He’s now a visual match, really, for the vulnerability he shows in songs like “This Job is Killing Me” (A Hundred Miles Off), where his voice cracks on the word “home” and suddenly he’s standing so much smaller.

Of course he’s somewhat tamer than usual, though. Last year’s brilliant You & Me was much better received than the two records before it, and though a few key girls in the audience were, as expected, bounce-bouncing to semi-hit “The Rat” (Bows and Arrows), a whole floor was eager to accept the gems of the last record.

Why fight the pleased? So he quieted his angry eyes and let Paul Maroon’s Gretsch steal a few lights. As with “On the Water” and “Donde Esta La Playa,” respectively with tense build-up and great mystery, and “Postcards from Tiny Islands,” frantic but played with such enviable ease, Maroon’s left hand tirelessly transitioning between chords separated by five frets.

By the time the show could conclude with a cover of the Kinks’ “Come Dancing,” Leithauser almost looked happy. His impression of Ray Davies’ impression of a Caribbean accent was passable, albeit mismatched for his New York leather jacket stance, but when it was over he smiled, unexpectedly and rather widely at that.