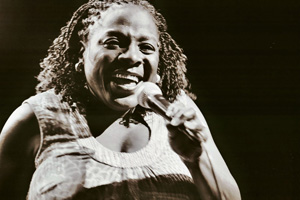 The Ivan Milev Band was, admittedly, sort of an odd choice to open for Sharon Jones & the Dap-Kings. Milev, a portly man who could shred like a rock god on his beautiful accordion, and Entcho Todorov, the violinist who announced that the pair would play songs “from Bulgaria and other country,” swung with eastern European flair and even tried their hand at a bitchin’ Balkan version of “Tequila.” Unexpected opener, certainly, but they charmed our collective pants off.

That Sharon Jones, though – she’s something else. Dap-Kings guitarist Binky Griptite introduced her as the “super soul sister with a magnificent je nais se quoi.”

And really, who other than Jones could engage in a dancing dialogue with individual audience members, teach a boy in the single digits how to “be easy,” teach us about fishing in Jersey and wrap up the whole package with a solid rendition of “A Change is Gonna Come?” All the while winking off innuendo and shouting out to the designer of her fabulous dress? That’s Trina Turk, by the way.

Fifty-two-year-old Jones is a confident stage presence, adept at dancing in skinny heels, ad-libbing the hell out of her act and never letting other women steal her men (she gave a verbal warning to a stage invitee who danced her way over to John C. Reilly-esque trumpet player Dave Guy). But she’s a marvelous singer above all else, and what really gave her power were the band’s newest songs, like “Loving You,” which got her literally moaning.