SHENANIGANS ON FEBRUARY:: Every month is Black History Month. 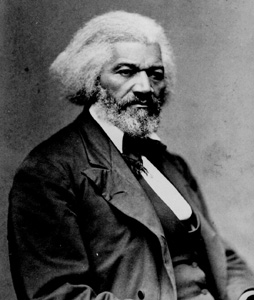 I spent the majority of January getting mixed signals from February, and I had to ask myself: If the first national holiday since winter break is dedicated to Martin Luther King, Jr. and the following day saw the inauguration of an African-American president (soon-to-be Barack Obama Day), then why is Black History Month still in February?

Black History Month started in 1926 as “Negro History Week,” a celebration of advancements placed in the first week of February ¬– according to the historian who started it – because of both Lincoln and Frederick Douglass’ birthdays. Despite the obvious irony in rejoicing black history when drinking fountains would be separated for another 40 years, the month chosen is now obsolete in several ways.

Firstly, who the hell is Frederick Douglass? Yes, he was an abolitionist who spread the word of equality for all and – as the first African American to be elected as a Vice-Presidential third-party candidate (in 1872) – is undoubtedly a historically important predecessor to current politics, but, really … who is Frederick Douglass to Americans today? A photo in a history book? A name on a timeline?

What he did was amazing for the 19th century, but his image is far less inspirational than, say, Rosa Parks or Tupac. This is because we don’t stack sequential events on top of one another in order to grasp the full concept. Instead, we prefer to pick one – or a few – situations, idolize the personalities involved and say that they represent the movement and embody the idea of African-American advancement.

No one is airbrushing Douglass’ likeness on the backs of their denim jackets, but every day, Obama shirt-wearers wait for the Metro Blue Line at the Rosa Parks Station. So with Douglass’ legacy subsequently picked up by more identifiable figures whose birthdays occupy other months and Lincoln’s birthday linked up with Washington’s to make the very un-black history-esque Presidents Day, February is now as irrelevant to black history as it is to Halloween and the possibilities for a new designated commemorative time period are endless.

We could take into consideration other important events in black history: The Civil Rights act of 1875 was signed in March (also the month Notorious B.I.G. was murdered), the Civil Rights Act of 1964 was enacted in July and the Black Panther Party held a 40 year reunion in October of 2006.

Or – and I know this is a huge stretch – instead of finding the “most appropriate” month for celebrating the long plight of African Americans, why don’t we spend every day of every month remembering the history of a people we took away from their continent, forced into slavery only to sort of let them be free (but not really because of ignorance and fear) until we finally said you can’t discriminate on the basis of skin color, but now we’re so culturally alienated from each other that we have to set times aside where we can ponder on the horror we hath wrought with smiles on our faces? Yeah, I didn’t think so.