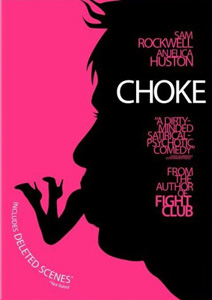 The Cult of Evil Dead

Evil Dead star and one man B-movie cottage industry Bruce Campbell pokes fun at his legacy with My Name Is Bruce, directed by the man himself.

Based on the memoirs of a Brit turned Hollywood gossip columnist, How to Lose Friends & Alienate People (Feb. 17) is an enjoyable light comedy starring Simon Pegg of Shaun of the Dead. The title is pretty much the funniest thing about it, but Pegg keeps it lively with help from Jeff Bridges.

Fight Club fans rejoice, the second adaptation of Chuck Palahniuk’s work, Choke, comes to DVD Feb. 17. Sam Rockwell stars in this dark comedy about a sex addict who pretends to choke in restaurants.

Back in the ’50s, before the idiotbox showed people eating worms for money, it was an exciting new medium full of possibility. It was the Golden Age of TV, when networks broadcasted well-crafted live productions with A-list talent. Budd Schulberg’s “What Makes Sammy Run?” directed by Delbert Mann (Marty) is one such production, a scathing Hollywood tale.

Before HBO redefined the hour-long drama, perhaps the closest thing to the Golden Age in modern TV was the British miniseries. Dennis Potter: 3 to Remember features three teleplays by the writer of “Pennies From Heaven” and “The Singing Detective.”

If you’re not sick of Clint Eastwood this year, try his American Icon Collection, which features his directing debut Play Misty for Me, as well as other ’70s thrillers: The Eiger Sanction, Coogan’s Bluff and The Beguiled.

The Skulls Trilogy – A scarier film would’ve been a documentary about the illusion of democracy when our choices in presidential elections are between two members of an elitist screw-over-the-world club.

Street Fighter: Extreme Edition – This was seemingly released for the sole purpose of promoting the new “Street Fighter IV” video game (trailer included). And is that award-winning Puerto Rican actor Raul Julia as General M. Bison? Yes, yes it is.

The Wonders of Nature (Without Having to Get Up)

Two Animal Planet shows celebrate humans and our furry friends. For the liberal in the family, Whale Wars follows a crew of conservationists who run interference with Japanese whaling boats at great personal risk. And if that’s too mushy for you, watch nature get her revenge in Untamed and Uncut (Feb. 24), a collection of animal attacks caught on tape.

Before the remake hits theaters, revisit the original Friday the 13th trilogy, with all new re-mastered editions. Then you can wow your friends with such exciting trivia as the fact that iconic slasher maniac Jason (who doesn’t even appear in the first film) wears a burlap sack on his head for the entire second movie, not donning his trademark hockey mask until the third film. And yes, Part 3 comes with 3-D glasses.

Extreme Movie (Feb. 24) is what you’d get if 13-year-olds remade Woody Allen’s Everything You Always Wanted to Know About Sex. The raunchiness is cranked up but the jokes are left behind in this collection of loosely related teen sex sketches. Michael Cera appears (why?) along with Frankie Muniz, while Matthew Lillard and Jamie Kennedy do Dimension a couple of favors with cameos.

Treat your Valentine to a night of laughter with the Blu-ray editions of Napoleon Dynamite and Little Miss Sunshine. The onscreen quirkiness will remind your loved one how fun an ordinary evening of popcorn and movies at home can be. —Y.S.