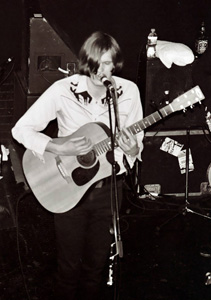 When the Strokes aren’t busy being the famous sons of famous men or inventing a likeness to Devendra Banhart, they spend their time on hiatus being Nikolai Fraiture, moonlighting as Nickel Eye while backed by members of British band South.

Much like the Strokes themselves, Strokes fans are gorgeous and wear leather jackets. But Nickel Eye is not the Strokes, and though he is, surely, the Underrated Stroke, there is a reason for Fraiture’s usual positioning as bass player and not frontman (though, interestingly, it was Lucas Field of supporting act Low Vs. Diamond who more closely recalls the likeable cool of Julian Casablancas).

Fraiture’s efforts didn’t see an audience cheering for an encore, and in truth, about 20 percent of the Troubadour’s floor space had emptied between the ends of supporting and headlining sets. Save for closing song “Dying Star,” which would have fit well on First Impressions of Earth, Fraiture’s acoustic guitar and Peter Perrett’s voice led folky semi-adventures halfway between (appropriately) French-sounding stomps and a mid-’70s sound.

He hasn’t got much charisma or energy, but he’s got versatility and charm, and Nickel Eye finally gave the silent Stroke a chance to smile and speak aloud. We still love you, Nikolai.