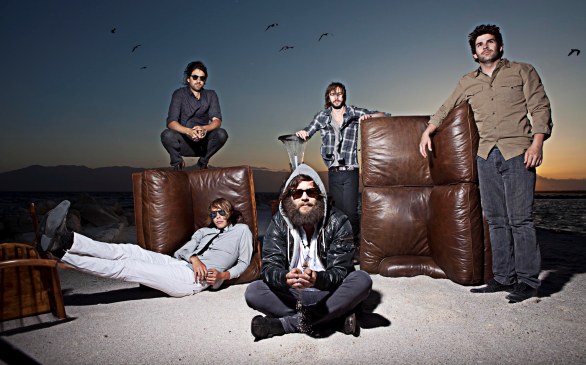 An unannounced DJ set meant plenty of sitting until the 10’o clock hour, and it was, at first, disappointing to see an iBook and turntable setup resting on a table, rather than equipment for a live band. But Nightmares on Wax, led by Leeds DJ George Evelyn and joined on vocals by Sara Garvey and Ricky Ranking, made up with a solid hour-and-a-half of dance fodder.

The set translated with a greater hardness and heavier impact than much of the downtempo Evelyn placed in his recordings, assisted by fair audience participation – on “Da Feelin” (Thought So...), with its hey/ho rhythm, and the energy of those live vocals, like Garvey’s on “The Sweetest,” “Damn” (In a Space Outta Sound) and the ultra-sexy “Moretime.” Ranking’s voice started to give out toward set’s end, but he was wildly smooth up to and during that point.

Luckily, Garvey started to supplement some of the pair’s lead vocals by holding the mic up to the crowd, giving a small shot even to the ... ah ... older gentleman in a baseball cap. Life’s cool when you bleed positivity.

Evelyn came out of hiding and showed off a bit of his great grimy Brit accent here and there, though he was perfectly entertaining to watch from behind his table. Great fluidity and gorgeous circular movement – if only he’d not spent the night chewing gum with an open mouth.