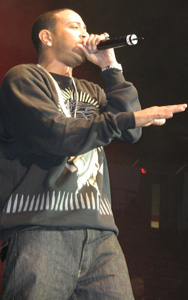 Ludacris took the audience on a journey through the roots of his beginnings.
(Credit: J. Poakwa)

Decked out with graffiti displays, the music and arts festival was set up to be a learning experience for all ages. It was a multifaceted, multimedia experience designed to showcase all aspects of the hip-hop culture, including musicianship, dance and art.

The festivities of the night got off to an amazing start as Janelle Monae ripped up the stage with an incredible performance parallel to the intensity of a young James Brown. Monae performed fan favorites such as “Sincerely, Jane,” as well as a show stopping performance of “Many Moons,” in which she jumped into the crowd and sprayed water over the media pit and front row – normal for a Monae performance.

Dance battles in between sets hosted by Stomp the Yard star Columbus Short brought the crowd into the dance facet of the hip-hop world. The competition displayed all genres of hip-hop dance including krumping and break dancing. Winners of the dance competition were given a scholarship by the festival.

Common’s arrival to the stage served as an “Announcement” that real hip-hop was indeed in the building. Common’s performance brought the intensity back up as he performed classics from his catalog such as “I Used to Love H.E.R” and songs off his latest release, Universal Mind Control: “Sex 4 Suga” and “Punch Drunk Love.” Common ended his set in B-boy fashion as he uprocked and holla’d to his hit “Universal Mind Control.”

Ludacris was the last professor of the evening to hit the stage.

“With Hip Hop 101, I’m just trying to put people in the same mindset of what I feel real hip-hop is,” said Luda in regards to what fans could expect from his performance.

Accompanied by Lil’ Fate, I-20 and Shawnna, Luda took the audience on a journey through the roots of his beginnings with “Growing Pains,” “Move Bitch” and “Area Codes.” Before he left the stage, Luda shared “One More Drink” with the legal alcoholics of the audience and showed his appreciation for California’s fine “greenery” with “Blueberry Yum Yum.”

The hectic work behind the scenes and by the performers on stage left the patrons of the Hip-Hop 101 festival satisfied and with a greater appreciation for hip-hop culture.