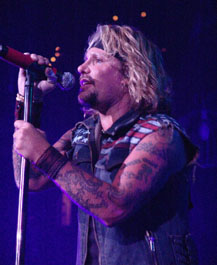 The circus is in town, but it’s not what you think. After 25 years of records, touring, drugs, dying, living and always rocking, Mötley Crüe has embarked on another worldwide journey in support of their latest greatest hits album, Red, White & Crüe. Stopping in their hometown to play the Great Western Forum, the boys in the Crüe proved for the most part that after a quarter century they still have the licks – and the chicks.

Missing from the two-and-a-half-hour set, which was part of the current Carnival of Sins tour, was a sense of camaraderie between the band members. During the first half of the show, the band played some older numbers including “Shout at the Devil,” “Too Fast for Love” and “Looks That Kill,” but with every passing song it became more and more clear that the bandmates were keeping their distance from one another.

Though the band was tight, Vince Neil’s voice was a far, worn-out cry from the glass-shattering glam-rock wail it was in the band’s heyday, and despite Tommy Lee’s attempts at clever banter, the first half of the show passed by with a seemingly detached Mötley Crüe.

After a brief intermission, which included a short cartoon on the video screens, the second half of the show opened with the sounds of thundering motorcycle engines and the comical sight of a midget coming out riding a mini-bike. Disbelief proved virtuous, and soon enough, the real sources of the rumbling carried Neil, Lee and Nikki Sixx onto the stage on three beautiful, custom-built choppers. Mick Mars was obviously absent from the herd of steel horses – probably due to a rheumatic spinal disease which he has been battling, which reduced his stage presence to light bobbing and pained ambling.

“Girls, Girls, Girls” was the first number in the second half and it came complete with scantily-clad female circus ring performers and video screens full of women wearing even less.

During a break in the action, Neil took the time to explain to the fans that, “You fuckin’ guys are the fuckin’ reason that rock ’n’ roll is still alive.” The crowd of mostly older Crüe fans responded vocally in a moment of self-aggrandizement.

Things then slowed down with a block of ballads. “Without You,” and “Home Sweet Home” saw Lee take up the keyboard to provide the soft touch while Neil attempted to belt out the high notes to entice the lighters into the air.

Lee then performed his solo spot behind the drum kit and even above the stage as he flew between two different percussion sets, including one made of scuba tanks and saw blades. He afterwards proclaimed, “You guys have no fuckin’ idea how fun that shit is.” Lee then took a video camera, dubbed it the “Tittie-Cam,” and gave the audience a taste of good old-fashioned Los Angeles silicone. “You know why we did that shit? Cause somebody told us not to!” Lee explained.

Rounding out the set were classics such as “Dr. Feelgood,” “Kickstart My Heart,” “Same Old Situation” and even a few new tracks recorded for the album. Multicolored pyrotechnics and a slew of circus performers including fire-breathers and a clown on stilts decorated the stage as the boys finished up.

The encore included Sixx’s son Gunnar joining the band on guitar to play versions of “Helter Skelter” and “Anarchy in the U.K.”

Though Mötley Crüe is a dying flame, they still seem to have one last hurrah in them. The day of reckoning will come when after touring in separate tour buses, the band members realize the glory days playing at the Whisky are irreconcilably behind them.